Topic A: Investigating and addressing corruption and crime in FIFA in the 2022 World Cup

In December 2015, 16 Officials of the FIFA were charged by the United States with racketeering, money laundering, and wire fraud resulting in the removal of the FIFA president and his ban from the association for 6 years. Football is the most popular sport in the world, and the world cup is one if not the world’s largest sporting event giving football’s governing body a large influence on global culture and politics. Recently, there have been several allegations against past and future host countries accusing them of using massive bribes to obtain hosting rights to the tournament. Additionally, FIFA has been known to have exploited local communities and governments of hosting countries and disregarded their sentiments, with locals sometimes being uprooted from their homes to make way for infrastructure for the world cup.

Qatar is the next host of the World Cup in 2022, and the situation has been reported to be  a human rights disaster. Use of migrant construction workers has already resulted in hundreds having died building the stadiums due to poor working conditions, and an estimated 4000 more migrant workers are expected to die by the end of the project.The rampant corruption involved in this process is alarming, and threatens the integrity of not just FIFA, but football worldwide. FIFA has continued its policy of looking the other way and has not made any substantive attempts at resolving the problems in Qatar, or their own internal corruption. The CCPCJ guides the activities of the United Nations in the field of crime prevention and criminal justice and as such should be well suited towards helping resolve such an often disregarded issue.

Topic B: Criminalizing the misuse and reselling of prescription drugs

As stress and pressure under high school students and university scholars keeps rising, the usage of Ritalin, Adderall, Vicodin, antidepressants and other prescription drugs have also seen a notable increase. High pressure to perform well is a growing problem in higher education, this pressure bringing young adults to come to the edge of their limits, or even leading them to experience a burn out. Recently, this pressure has manifested itself in a growing misuse of prescription drugs. Ritalin and other medication help focus, enhance concentration and reduce the allures of distractions but they are only distributed based on a prescription because of the strong effect they have. This has created a black market where teenagers with a prescription sell their medication to other students, that do not officially need it. Using these drugs without a prescription can be very dangerous as they can result in restlessness, higher blood pressure, increased heart rate, nervousness, insomnia, exhaustion and on the long term even depression. The dangerous results of these prescriptions drugs on students without a prescription urge the international community to find solutions to prevent these sales from happening and to increase the mental health resources offered to students who feel like they would otherwise need these prescription drugs to function and to focus. 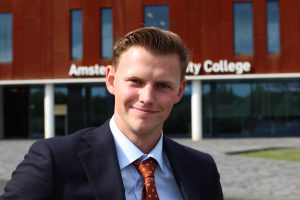 First of all, I am a Dutch student currently in my second year of AUC and in terms of looks I am about as Dutch as it gets. Throughout my AUC career, I will be focussing on the fields of Law and Computer Science. I have always been up for a good debate and participated in various Dutch and European equivalents to MUN. My real MUN experience started about 3/4 years ago when I received the privilege of joining my high school MUN delegation. Now, various conferences and a wide variety of delegations later, I hope to once again play a significant and successful role in the conference of my own university. I am confident that through auspicious collaboration with my co-chair Thomas, the organising team of AUCMUN 2019 and of course through the hard work of the delegates in the committee room, this edition of AUCMUN will once again be a  wonderful experience. Asides from the hopefully fruitful debate, I really look forward to meeting you all and chairing again! 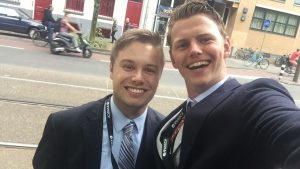 Hi everyone! My name is Thomas, I’m 23 and currently mastering in Health Law at the University of Amsterdam, having graduated from AUC two years ago. My passion for law and international relations brought me to MUN in 2010 and I’ve never been able to say goodbye to it ever since. AUCMUN will be my 48th conference, following conferences all over Europe, as well as in Israel, Turkey and the United States. Having served as the Secretary-General of AUCMUN 2016, the very first edition, I’m especially honoured to return as a Chair for this edition and to be chairing with my dear friend Justin.

As Chair of the CCPCJ, my aim is to make the weekend as enjoyable as I can for the delegates, as the fun (and the wonderful people) have always been my true motivation for returning to MUN over and over again. I hope AUCMUN 2019 can provide a mix of intelligent debate, high-class diplomacy, fun socials and perhaps the start of some new international friendships! See you in April!